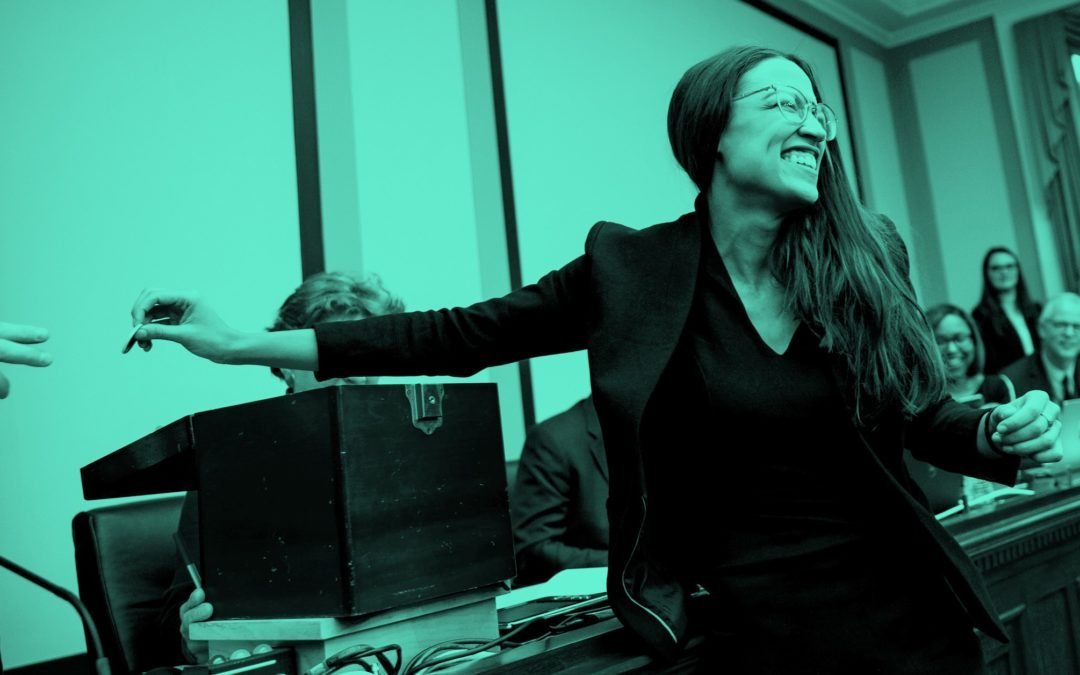 I’ll just say it: Alexandria Ocasio-Cortez is a social media marketing genius, and very likely a harbinger of a new American political reality.

A summary for those living in a Twitter cave: Last week, a video emerged of a college-age AOC doing a dance routine, mockingly tweeted by what appeared to be a QAnon conspiracy account (since deleted), and later retweeted by Gateway Pundit and memed by the Daily Caller. There was an immediate counterreaction on the left to the supposed (though possibly overstated) reaction on the right, which sparked a counter-counterreaction. It was a spectacle all the way down.

Amid the media swirl, AOC dropped a very concrete policy proposal on Anderson Cooper’s show: increase the top marginal income tax rate to 70 percent, effectively rewinding history to before the 1980s Reagan-era tax cuts. In an instant, Paul Krugman, economics Nobelist and New York Times columnist, chimed in with his support, and suddenly the Overton window of acceptable discourse on taxes blew open.

Of course, for weeks before the dance kerfuffle, AOC had regaled her growing list of followers—which last week surpassed that of the newly installed Speaker of the House Nancy Pelosi—with candid looks at DC politico life, including the party leadership election process, the office lottery, the joy at getting official congressperson business cards, and even doing laundry. Her Instagram feed is a master class in political brand building, and I’d not be surprised if canny civics teachers are assigning it as homework. In a world awash in irony and preening phoniness, she possesses the unique and valuable currency of authenticity: She is who she ran as, she’ll be that same person in office, and it drives her political opponents crazy.

AOC isn’t alone here. Rumored presidential candidate Kamala Harris was quick to defend AOC, and posted some dancing herself. Caught up in the zeitgeist, Elizabeth Warren did her own Instagram livestream on New Year’s Eve. The grainy video climaxed with her announcing “I’m going to get me a beer” before cracking open a Michelob Ultra and taking an awkward swig. Are we to seriously believe that a 69-year-old Harvard professor routinely utters such an elocution before pounding a beer? Yeah, me neither. But start the countdown to Bernie attempting a keg stand while rapping.

This all sounds like so much gossipy piffle, but I submit it’s not. The great politicians of any media age, particularly the disruptive upstarts, are masterful adopters of new media. The 1858 debates between a then-unknown Abraham Lincoln and Stephen Douglas were a media sensation in their day, widely reported, and paved the way for Lincoln’s sudden rise to the White House two years later. The Kennedy/Nixon televised debate of 1960, where a youthful and beaming Kennedy easily out-charisma-ed a dour and unshaven Nixon, is a case study in the political impact of TV. Trump is quite literally a reality TV star who dominates cable news while keeping the world in suspended anxiety via Twitter. As a counterexample, the fact we’ve never had another president like the 340-pound William Howard Taft highlights what happens (or doesn’t) when the moving image reigns.

Thus when a 29-year-old former bartender of Puerto Rican descent beats a senior Democratic leader of the House, and then proceeds to set the political agenda during her first week in office, it’s more than a cute social media story. AOC is one answer to the bigger question of how social media impact not just the portrayal of political power, but its seizure and exercise.

To date, the role of social media in political and social upheavals has been as a polarizing spark and impromptu organizing platform, usually though not always for ill. The Arab Spring, Gilets Jaunes, and more sinister examples in Myanmar and Sri Lanka, demonstrated how you could muster real-world militancy or even violence out of Facebook groups. More positively, some movements actually achieved political ends: the Gilets Jaunes got their fuel tax repealed, the striking teachers in Oklahoma got promised pay raises.

In Spain, an online insurgency that followed the 2008 economic crash ultimately coalesced into a real political party, Podemos, that broke the country’s cozy two-party system. Unlike other insurgent movements, the indignados (“outraged”) issued a semicoherent manifesto signed by mainstream academics, and began fielding candidates in elections. Within two years, they were a national force. It was nothing short of an earthquake. The key lesson is that the social media mob, once roused, was channeled into the conventional political process rather than standing outside it, much like AOC.

So, is Spain an exception to a more general rule that social media destroys rather than creates?

In a recent book The Revolt of the Public by Stripe Press (yes, that Stripe), Martin Gurri proposes that the ultimately corrosive effect of social media is undermining collective credulity around public institutions like government or the press. Humans are flawed creatures, and their institutions necessarily more so. When those institutions, whether it’s the federal government, the NYPD, or The New York Times, lost the ability to shape and distribute the narrative, societal faith disappeared as well. Some of that democratization of storytelling yielded just fruits, like the backlash against police shootings. But belief in such collective delusions like capital “T” Truth makes our societies possible. Yes, there’s a willful naïveté to it, but sometimes ingenuousness is the greater wisdom than worldliness. Did anyone truly think Walter Cronkite was studiously correct when he closed each newscast with “And that’s the way it is?” Of course not. But that was the ground-truth narrative that allowed a discussion, however flawed, of the world common to all of us. Instead, the polity now fields dueling narratives and hostile chants of “fake news!”

But what if social media could create rather than destroy? What if we come to our senses and the same narcissistic livestreaming that gave us “brand influencers” also gives us a new generation of political talent, along with the tools for them to challenge the gerontocracy in power? What if AOC is a taste of that future? For all her virtual charisma, AOC still needs to pass (or help pass) actual legislation. She’ll still need to navigate the congressional old guard she’s upstaging online. To update the famous Mao quote, does political power really grow out of the screen of a smartphone?

To see how effective tweets alone are, consider her media analog (but political opposite), President Donald Trump. The federal government has been shut for more than two weeks. The uncollected human waste at national parks is accumulating and creating a health hazard (among other unpleasantness). Tweeting is apparently one thing, and governing another.

But the present and future AOCs of the world can afford to play the long game; even if Twitter likes don’t translate into legislation now, the media shift they’re causing will be long-lasting. Andrew Breitbart, another canny user of new media, once famously said “Politics is downstream from culture.” I’d venture that both politics and culture are downstream from technology, and we’re about to see a rejiggering of the aesthetics of aspiring political leadership. The same way florid, hours-long public oratory (echoed by the newfangled telegraph and newspapers) was the route to power for Lincoln in 1860, the preeningly candid self-display of streaming social media will be the route to power in 2020 and beyond. From just the first week of 2019, it’s very clear which demographic will best exploit it.