To Combat Climate Change, We Gotta Get a Better Battery. But How? 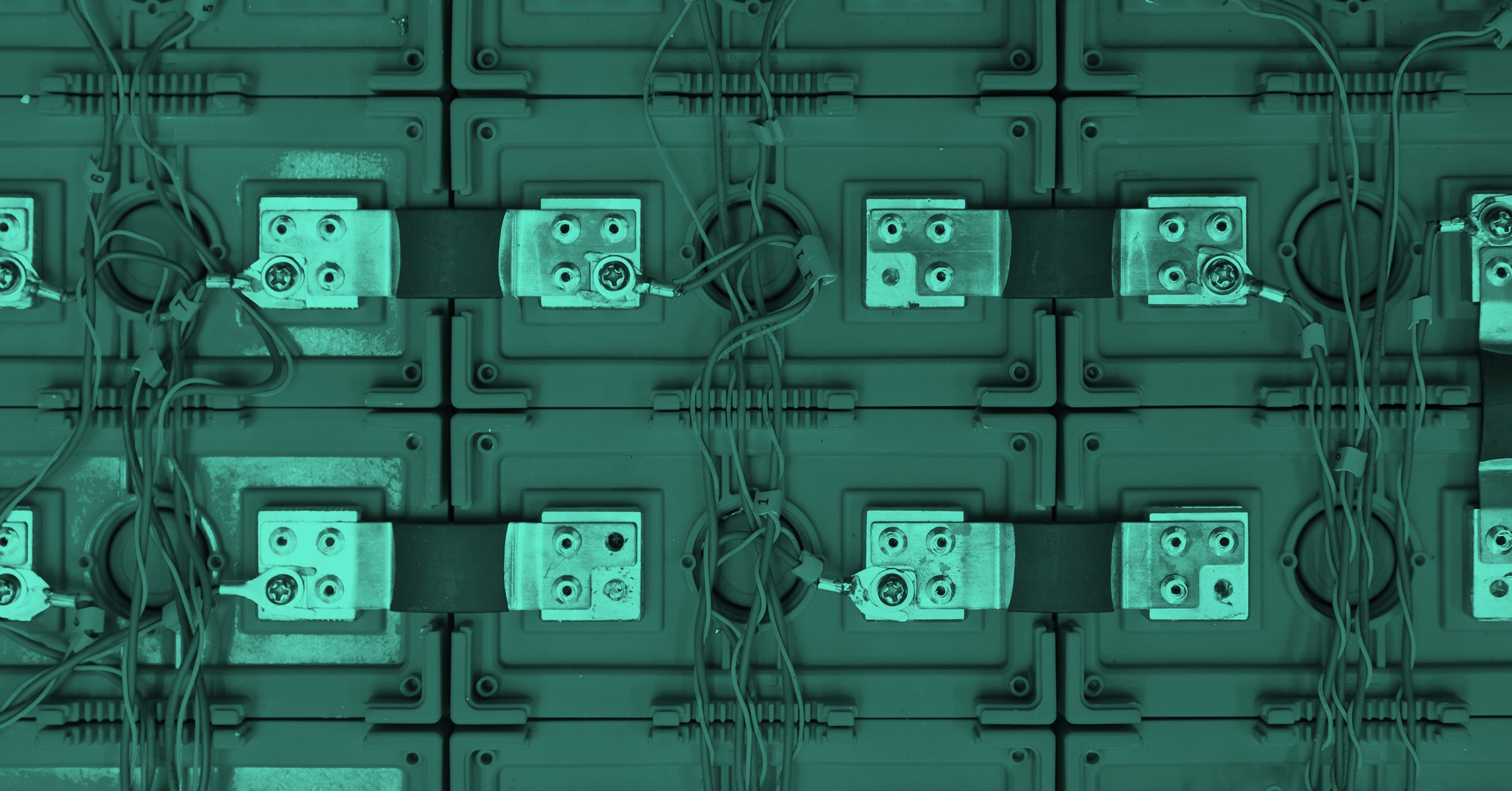 “It will not be easy. It will not be immediate. But it must be done.” With that imperative, Governor Jerry Brown signed a law that required California to obtain all of its electricity from sources like solar, wind, and hydropower by 2045. It was an admirably ambitious goal, commensurate to the civilizational challenge of reducing the carbon emissions responsible for climate change. The only difficulty was that neither Brown nor any anyone else knew how to do it.

The world’s fifth-largest economy had been on track to get half its power from clean sources by 2020. But by signing the new law on September 10, the governor made a promise that existing technologies cannot keep. The problem with advanced renewable sources of energy like solar and wind is that the sun doesn’t shine at night and wind blows intermittently, and both sun and wind (especially in California) are seasonal, waxing in summer and waning in winter. Right now, technologists don’t know how to store electricity from renewable energy at scale cheaply or efficiently. The person or group who solves that problem will be the Prometheus of our age.

Casual observers of clean energy are often surprised by its limitations. Greenhouse gas emissions have fallen in California by 13 percent since 2004, even as the economy has grown by more than a quarter. That unprecedented reduction is partly the result of increased dependence on natural gas, which is cleaner than coal, but mostly because of the falling costs of renewable energy. The change is wonderful: Between 2008 and 2015, the price that energy utilities paid for solar energy fell by 77 percent, and wind decreased 47 percent, according to a report by the California Public Utilities Commission. Those falling costs encouraged energy providers to construct solar and wind farms all over the state.

But this exhilarating progress in “decarbonizing the energy sector” (in the jargon of energy economists) misleads. Today, utilities manage the intermittency and seasonality of renewable energy by firing up small “peaker” power plants, typically fueled by natural gas, when prices and demand are high. But generating more of California’s energy from solar and wind would require utilities to produce huge surpluses of energy during summer months and store that energy for use throughout the year. According to a much-publicized analysis by an energy policy think tank, the Clean Air Task Force, generating 80 percent of California’s energy from advanced renewables will require 9.6 million megawatt-hours of energy storage. 100 percent would require 36.3 million. For context, the state now maintains just 150,000 megawatt-hours of energy storage, mostly hydroelectric. Lithium batteries provide a small portion, too.

Jason Pontin (@jason_pontin is an Ideas contributor for WIRED. He was formerly the editor in chief and publisher of MIT Technology Review; before that he was the editor of Red Herring. Now he is a senior partner at Flagship Pioneering, a firm in Boston that funds companies that solve problems in health, food, and sustainability. Pontin does not write about Flagship’s portfolio companies nor about their competitors.

The lithium-ion batteries in our phones or electric vehicles won’t scale to that challenge. Despite steeply falling costs, they’re still far too expensive, and they don’t store energy long enough. A clarifying study by researchers at MIT and Argonne National Lab published in 2016 demonstrated that “substantial cost reductions are likely needed to economically justify large-scale deployment of [existing] storage technologies.” Translated by the Clean Air Task Force: Even if lithium-ion batteries were as cheap as possible, California would have to spend $360 billion on storage to satisfy Brown’s imperative. Nationally, storing 12 hours of energy would cost $2.5 trillion, according to another study in Energy and Environmental Science. Overall, energy costs would increase from $49 per megawatt-hour at 50 percent to $1,612 at 100 percent. The economics are implausible; selling the economics to consumers, impossible.

If batteries are to play their part, they must cost less than one-fifth the likely minimum cost of lithium-ion batteries (around $100 a kilowatt hour). To solve that problem, material scientists have turned to alternatives to lithium-ion, creating heavily capitalized companies like Aquion, which manufactured salt-water batteries, or LightSail, which wanted to store energy as compressed air. Ambri, a startup in Boston founded by MIT’s Don Sadoway and funded by Bill Gates, pursued an especially radical idea: The company used earth-abundant materials to make liquid-metal batteries, where the negative and positive electrodes are liquids and the electrolyte a molten salt. But Aquion and LightSail failed to create storage that was cheaper than lithium-ion batteries. Ambri has struggled to translate its research into a commercial product that utilities would buy. (The company couldn’t make seals on its batteries work, but claims to have solved the problem by abandoning magnesium and antimony for new, as yet undisclosed materials.)

If there will be no storage miracle, how would we save the world?

When I spoke to Gates a couple of years ago, he told me, “I’m in five battery companies, and five out of five are having a tough time. When people think about energy solutions, you can’t assume there will be a storage miracle.” Gates didn’t give up on the miraculous; he continues to invest in batteries through Breakthrough Energy Ventures, a coalition of billionaires, including Jeff Bezos, Jack Ma, and Richard Branson, who have committed to invest at least $1 billion to reduce the amount of carbon emitted per unit of energy to zero. Among BEV’s first investments is an MIT spin-out named Form Energy, founded by some of the most famous names in energy storage, including another MIT professor, Yet-Ming Chiang, who has started five battery companies (including A123 Systems, which a decade ago raised half a billion dollars as well as a $249 million grant from the US Department of Energy before filing for bankruptcy and being acquired by a Chinese company). Form Energy is developing aqueous sulfur-flow batteries, which inhale and exhale oxygen in a weird chemistry: They combine a sulfur anode dissolved in water with an aerated liquid-salt-solution cathode, where oxygen flows in and out of the cathode, causing the battery to discharge. Various reports claim the new batteries will cost somewhere between $1 to $10 per kilowatt-hour, compared with lithium’s current cost of $200 per kilowatt-hour, and store energy for weeks or even months rather than hours or days.

Form Energy’s approach is promising, but so were the technologies of A123 Systems and a graveyard of earlier battery startups. If there will be no storage miracle, how would we save the world? Three more or less plausible alternatives to batteries could finesse the intermittency and seasonality of solar and wind and help generate carbon-neutral energy. (That is, beyond the eternal hope of fusion. Physicists joke, “Fusion is the energy source of the future, and always will be.”)

First, we could store renewable energy at scale without employing electrochemical batteries at all. For instance, proponents of solar chemical, or artificial photosynthesis, have suggested using solar power to split water into oxygen and hydrogen, a fuel which can be used in fuel cells or burned in combustion engines. We could even combine the hydrogen with carbon dioxide, captured from natural gas peakers, to create methane, a fuel with a global infrastructure. Second, we could generate base-load electricity with nuclear fission, the carbon-free energy technology we already possess, producing enough energy to ignore the intermittency and seasonality of solar and wind. Lastly, and most destructively, we could tear down our existing patchwork of alternating-current grids and construct a new, high-transmission, direct-current supergrid, shuttling electricity across the continent and matching supply to demand with predictive software. All of these options have daunting technical, economic, and political problems, but if I were to bet, I’d guess (like the authors of the 2016 MIT and Argonne Lab study) that we will need some combination of these technologies and new batteries.

If California met its goal, it would be a model for other states and nations. Power plants are responsible for just 16 percent of the state’s greenhouse gases but are more polluting in other places. Transportation produces 41 percent of California’s emissions, and clean electricity would show the world that cars, trucks, and trains can be electrified cleanly. But the problem of how to produce 100 percent of California’s energy needs from renewable sources can’t be solved by the state alone. Our climate and energy systems are shared, and solutions will probably require a global increase in fundamental energy research, plus smart regulation like dynamic taxes on carbon.

Epochs are defined by their energy technologies, and decades pass before they are adopted. It took 150 years for humanity to abandon burning wood for coal. More recent technologies, like combustion engines or steam turbines, ate up 50 years. If we are to limit global warming to manageable temperatures, the older industrialized nations must emit no carbon by 2050; the whole world must be carbon-neutral by the end of the century. We don’t have much time to find a better battery or an alternative to batteries altogether. We must hurry.