WIRED’s Guide to Turning Your Kids Into Masterful Makers

This should be an officially labeled time of the year. I suggest we call it Maker Time—it’s that time after kids get out of school, but before all of the holiday festivities begin. This is the perfect time for kids (and adults) to make something. This is what I tell my own children (I probably heard it from someone else).

Don’t just be a consumer, be a creator (or the rhyming version—be a maker, not a taker). A consumer buys things but also watches videos, plays video games, reads books, plays with toys. A maker creates stuff—it can be anything, a video, a video game, a short story, or even a toy.

I think that all too often people focus on the consuming side of being a human and not enough on the making side. But now is the time to change that. Kids are likely out of school and maybe they don’t have too much to do. Now is the perfect time to make something.

It can be difficult to get started, so I am going to give you some of my favorite ideas. I’m not going to give too much in terms of details. The idea of making something is to be creative and not just follow a set of instructions. It’s not wrong to have instructions, but I don’t want you to feel constrained in anyway.

This one is great. It’s easy to do and very creative. Really you just need a phone or a tablet with a camera. There are plenty of apps out there that will work for both iOS and Android—just do a quick search. Oh, you might also want a tripod or at least something to hold the camera stationary while you move things around. Some of these apps also give a sort of ghost view of the last frame so you can line things up better. They are actually quite nice.

Here is a quick shot from a video my son made a while ago.

Using Lego pieces with the mini-figs works great since you can position them in many different ways, but kids can also use their favorite toys and narration over the video once it’s finished.

Make Some Other Video

There is a video camera with a portable studio right in the hands of most people—a smart phone. Try making a video. It could be a short scene or show how to cook something. How about this? Go interview some older humans and ask them interesting questions. What was it like before the internet? How did you get your first car? What is an experience you remember that kids today might not be familiar with? That would be fun.

This is the part that I like. Have kids actually make something. No, it doesn’t have to be super complicated like an internet-enabled robot (but that would be cool). Let me recommend two projects that are very flexible, fun, and safe.

First, kids could build a buzz bot. These are basically just small constructions with an off-balanced electric motor. When the motor turns, it makes the whole device (the “robot”) shake and thus it moves. It’s kind of cool and very simple to make. Everyone loves it. 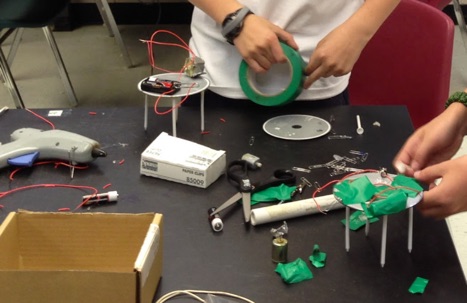 Here you can see these buzz bots use golf tees and a CD for a base. Duct tape and hot glue work great. If you want to make multiple ones, add some magnets on the side and watch them interact with each other.

Second, I can recommend an LED flash light. 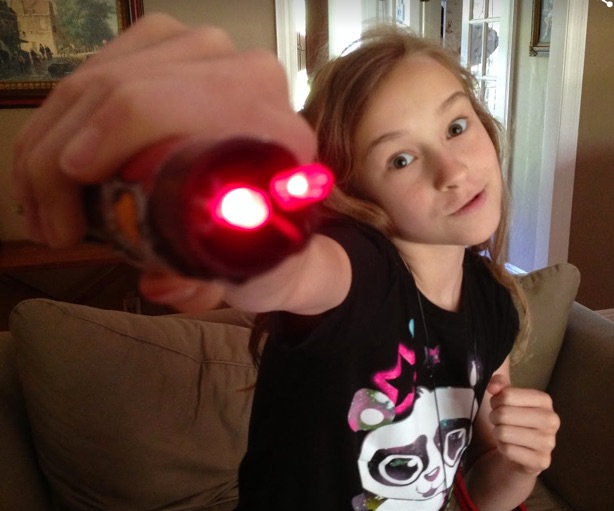 This is the flashlight my daughter made. She was super pumped up. It was created from a cardboard tube, wire, and a couple of LEDs. She decorated it the way she liked it and it was awesome.

You might not think of this as “making something”, and maybe you are correct. However, this is still fun and very instructive. But what could you take apart? Here are some suggestions:

There are probably some things you should avoid taking apart. Stuff with big capacitors are of course dangerous (like an old CRT type TV). Also be careful of objects with super sharp parts like a robotic knife thrower.

Who hasn’t played with a cardboard box? I remember using larger boxes to make a submarine (no, not a real one). But you can do much better. You can even get help. Try doing an internet search for “cardboard armor”. Yes, this is pretty cool. With just some cardboard and tape you can make something great. 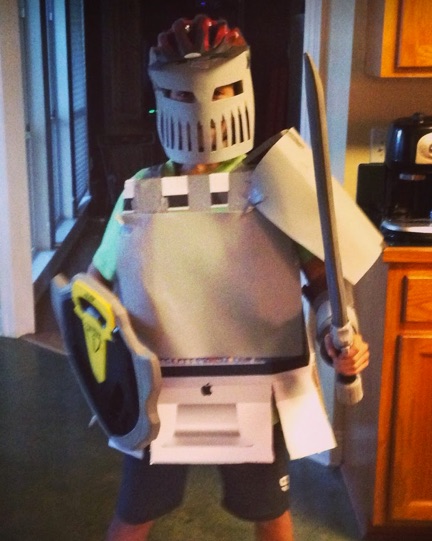 OK, technically in this example my son used some foam board too. Still, this could have been created with just cardboard. Or maybe this is just another great example that there are no rules. Anything goes when you are building stuff.

If you don’t want to get off the computer, then stay on the computer—but make something. You might be surprised at how accessible computer programming has become. Kids of all ages can easily start and make stuff. Here is a random moving soccer ball I made—just for you.

All the code is done with a graphical interface by dragging “code blocks.” You can really do a bunch of stuff with this, just take a look at the examples other users have posted.

Oh, but maybe you want to learn even more? Check out code.org where you can find some really excellent coding tutorials for all ages.

Other Stuff and Resources

The most important part of making things is to find something that you enjoy—but this could be anything as long as you are making stuff. Create stuff, and share the stuff you love. It’s great and there are no rules. Don’t go buy expensive supplies, just get by with the things you have around you (at least at first).

Here are some other resources for you.