America Has a Sick Obsession with Covid-19 Polls 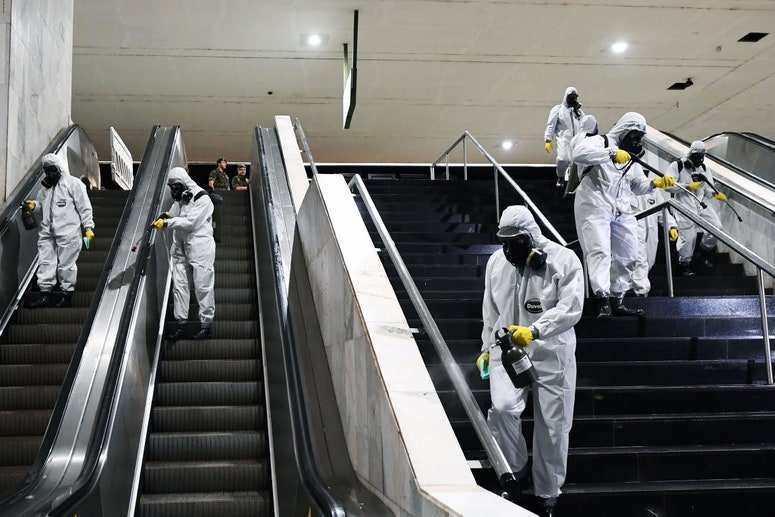 But small differences in these kinds of polls can make a big difference in the headlines they generate—and the decision­making they inform. Whereas the Associated Press-NORC Center poll gave respondents the options of answering “yes,” “not sure” or “no” to receiving a hypothetical Covid-19 vaccine, a Pew Research Center study asked if they would “definitely” or “probably” take one, or not. As a result, coverage of the former poll—“Only half of Americans …”—implied that the US is a nation of self-destructive antivaxxers. But coverage of the latter—“72% of Americans say …”—lumped together the certain with the somewhat trepidatious, and came out sounding much more optimistic.

It’s garbage data, but it’s also data that the leader of the United States used to delegitimize a leading scientist during the worst pandemic humankind has seen in a century.

America is a giant country with a giant Covid-19 problem. Its long-standing, “insane addiction” to polls is so unhealthy that it ends up as a risk factor for poor decision­making. For one thing, polls only give us a snapshot in time. They suffer from “short-termism,” as public opinion analyst Karlyn Bowman noted in National Affairs. “Pollsters ask questions about a controversial news event to secure coverage, only to move onto the next topic, making it difficult to determine how public attitudes are changing over time.”

Opinion surveys may also be inaccurate. The same errors that arise in political polling from low response rates, for example, might also plague public health research. “Those not participating in election polls may also not be inclined to participate in public health surveys,” wrote the Dutch social epidemiologist Frank van Lenthe. “Those who experience financial problems, poor housing circumstances, and work-related stress may give participation in research or interventions a much lower priority than those who do not.” If that is true then there’s reason to think that the very people who would be least likely to respond to a Covid-related poll would be among the most vulnerable to the pandemic’s ravages.

Another risk arises from the so-called bandwagon effect, whereby public polls end up altering the very beliefs they’re meant to measure. This concern—that the mere act of reporting on a majority opinion encourages people to conform to it—goes back as far as the 1930s and 1940s, as historian Jill Lepore noted in 2015 for The New Yorker. Lawmakers back then regularly introduced motions in Congress “calling for an investigation into the influence of public-opinion polling on the political process.” It only makes this problem worse, Lepore writes, that “a sizable number of people polled either know nothing about the matters those polls purport to measure or hold no opinion about them.” Covid polling could end up spreading the opinion that it’s safe to open bars, for example, despite warnings from public health officials.

People are particularly sensitive to social cues about emerging health behaviors, says Damon Centola, a professor at the Annenberg School for Communications at the University of Pennsylvania. He points to mask wearing as one example of this in the US. “It’s so conspicuous because it’s new, and it’s shifting underneath our feet,” he says. People have looked to their peers to decide whether to wear a mask, and the practice has become emblematic of local community values—and even political partisanship. It’s not too hard to imagine how those pandemic-politics mashup polls would encourage this kind of division, by continually highlighting the different attitudes among different groups.

We’ve now been through so many news cycles about masks, for example, and so many polling data dumps on the same topic, that basic public health measures can be easily recast and distorted through a political lens. “Mask-wearing has become a totem, a secular religious symbol,” one Republican strategist told The Washington Post. “Christians wear crosses, Muslims wear a hijab, and members of the Church of Secular Science bow to the Gods of Data by wearing a mask as their symbol, demonstrating that they are the elite; smarter, more rational, and morally superior to everyone else.”

Ohid Yaqub, a health-policy researcher at the University of Sussex in Brighton, UK, says that we need to elevate the voice of public health experts with “consistent messaging,” not poll outcomes. It will be an uphill battle, though. Last week, Donald Trump retweeted to his 83 million followers an online poll by the anti-Muslim organization Act for America, which asked whether they had more trust in the president or Anthony Fauci, head of the National Institute of Allergy and Infectious Diseases. More than 90 percent of the poll’s respondents had selected Trump. Given that it was a Twitter poll, many of the respondents were likely followers of Act for America, but the president doesn’t seem to care about things like sampling bias. It’s garbage data, but it’s also data that the leader of the United States used to delegitimize a leading scientist during the worst pandemic humankind has seen in a century. If we don’t put an end to this polling madness, we will be on an accelerated path to Idiocracy.

The framers of the US Constitution aimed for a government system that would not be at the constant mercy of the short-sighted whims of the people. But the growing dominance of polling undermines this goal. You only need to look back as far as February to see that twice as many Americans were worried about catching the flu versus coronavirus, even though there were plenty of reasons to fear the latter and it proved to be worse. Now is not the time to keep taking the temperature of the country with incessant polls; we’ve already had enough questionable temperature-taking in this pandemic.