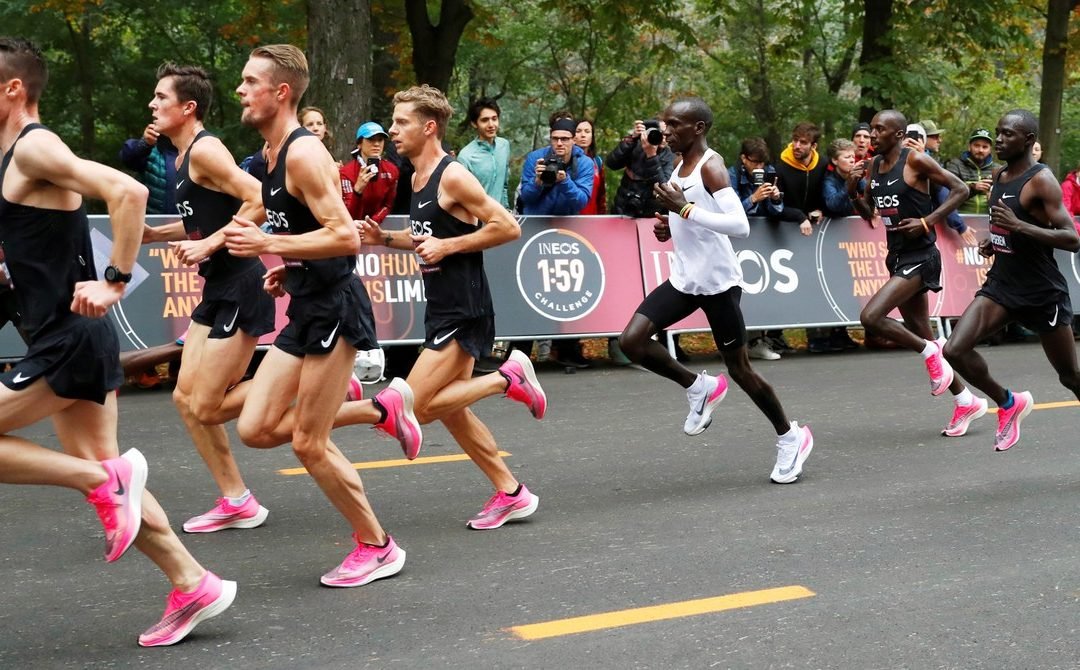 On October 12, 2019, Eliud Kipchoge crossed under a pink finishing arch emblazoned with the time 1:59:40. He had just become the first person to run a marathon in under two hours.

For a few hours, this achievement, long unthinkable, was celebrated across the world. Then came the question: What was the deal with his fancy looking sneakers? Kipchoge was wearing Nike Vaporfly Alphas, a shoe that had been designed specifically for him, as part of Nike’s long-standing attempt to break the two-hour barrier. This was the bespoke version of the Nike Vaporfly Next%, a shoe introduced in 2017 and chased by controversy, and fantastic sales numbers, ever since.

Francesca DeRosa is a PhD student in Princeton University’s History of Science program. She studies the history of medicine, and specializes in prosthetics.

Nike claims that Vaporflys make people run faster, longer. They have published a study to prove it. World Athletics, the governing body of track and field, will be the ultimate judge. Since the shoes’ release, they’ve been assessing whether the shoes provide an unfair advantage. They’ve promised a ruling—either banning the shoes from competition or not—by the end of this month.

The question is a difficult one for them, and one they’ve faced before. The last time World Athletics made a high-profile decision about a potentially performance-enhancing “technical aid,” they caused international outcry and were overruled by the Court of Sport Arbitrage. This was in 2008, when they attempted to ban Oscar Pistorius (who’s now in prison after being found guilty for killing his girlfriend) from running in the regular Olympics with his Flex-Foot Cheetah artificial legs. The “Bionic Olympian” caused a headache for World Athletics. The past tells us that the Nike Vaporfly is surely doing the same.

Calls to ban Vaporflys, from editorials in the British Journal of Sports Medicine to Instagram posts by record-holding athletes, claim that these soles, made of a proprietary foam surrounding a carbon-fiber plate, are springs. World Athletics has a rule specifically banning the use of technical devices that “incorporate springs” (rule number 144.2(c)). Or at least it did in 2008. Their rulebook’s latest addition, released in November 2019, has more general wording against technology that provides an advantage. This rule was raced through soon after Pistorius, who had then shattered Paralympic sprinting records, made his goal of running in the regular Olympics publicly known.

World Athletics (then called the IAAF) was acting on the certainty that “running blades,” engineered specifically for running fast, could perform better than regular legs. “We cannot accept something that provides advantages,” their director of development Elio Locatelli told the New York Times in 2007. “Next will be another device where people can fly with something on their back.” George Dvosrky, board member of the Institute for Ethics and Emerging Technologies, proposed the idea that athletes could “do something as seemingly radical as having their healthy natural limbs replaced by artificial limbs … Is it self mutilation,” he asked, “when you’re getting a better limb?”

These ideas were based the science fiction that The Six Million Dollar Man may become real reality. In the 1970s hit, Lee Majors’ character had survived a plane crash that took three of his limbs and damaged his spine. As the opening credits boasted, “We can rebuild him. We have the technology. …Better than he was before. Better, stronger, faster.”

Pistorius seemed to be the embodiment of this dream. A lean, muscular torso pistoned along a racetrack by two minimalistic metal cheetah legs. Could he be anything other than a Cyborg? Next to him, how could a runner with two human legs stand a chance?

Later in 2007, the IAAF decided to prove this theory. They invited Pistorius to three days of testing in Germany. Months later, they declared their results. Flex Foot Cheetahs were, indeed, springs. They provided an advantage, and Pistorius could not use them to compete against athletes not using them. Pistorius could not compete in the Olympics.