Sad QAnon Followers Are at a Precarious Pivot Point 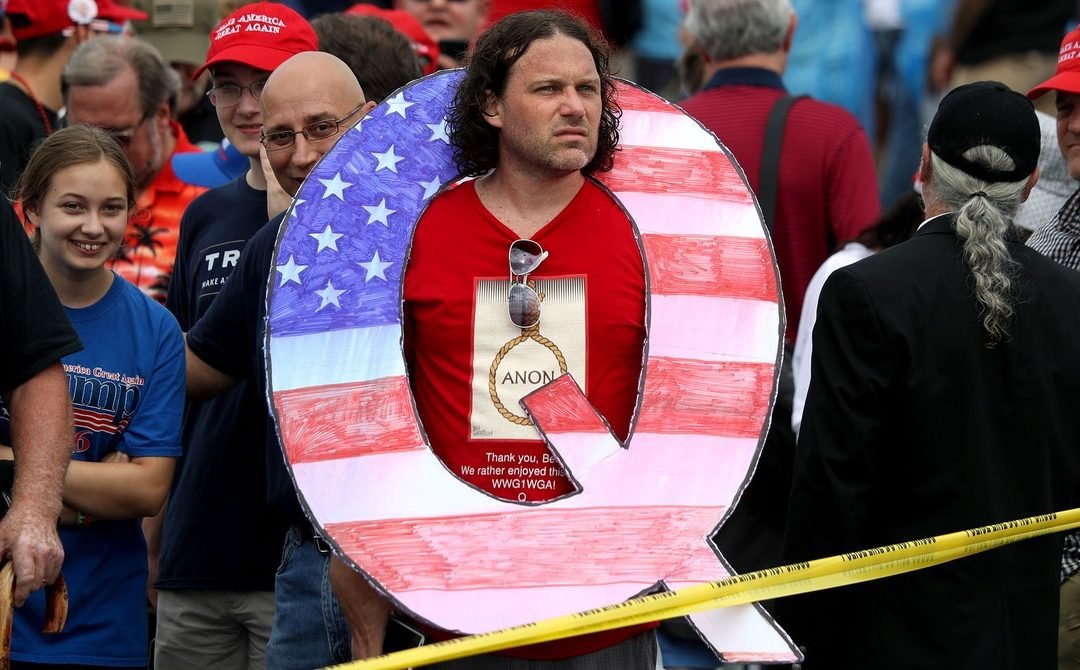 The QAnon conspiracy theory, spread in large part through social media, was recently supported by a majority of Republican voters. It is, at its baseless and thoroughly debunked core, the idea that a cabal of Satan-worshipping, cannibalistic, baby-eating pedophiles is operating an international child-sex-trafficking ring from their positions of power. It has grown to encompass many other conspiracy theories, especially around Covid, vaccines, and the election. Donald Trump was held up as a cult-like savior and was the group’s main source of guidance.

Now that the Biden administration has begun, the prophecies of QAnon did not come to pass, and Trump has left for Mar-a-Lago, what’s next? Research into similar groups tells us that, if QAnon followers are to leave the world of conspiracy theories, they need a dignity-preserving path forward. Extremist groups are already working to fill the Q-shaped void by recruiting QAnon believers to their own causes, making it urgent that better alternatives step up. That requires understanding the needs and motives of QAnon followers and providing a viable “off-ramp” from the QAnon world view.

While QAnon has been around since 2017, its popularity skyrocketed in March 2020 when the country entered lockdown and people’s uncertainty, insecurity, and free time skyrocketed. Born on the internet, it spread from 8chan/8kun to a much larger base via Facebook and Twitter. In the aftermath of the insurrection, Twitter alone shut down 70,000 accounts linked to QAnon.

Its appealed to people in large part because it offered them what they needed psychologically. People join cults and buy into conspiracy theories because they are dissatisfied with their lives, they lack security, and they want to feel good about themselves and their identity groups. The online dynamics of QAnon provided this. Followers crawled posts and online data sources for clues to solve the mysteries posed by the group. They shared their theories and were rewarded with engagement and the sense of being in a community of like-minded people. Seeing patterns connecting Q’s posts to real events felt like discovering secret information. If Q, the anonymous alleged government insider whose information drops launched and fueled the conspiracy theory, posted a photo of a watch with a short comment, his followers would enhance the watch image to see the time and date, interpret what it could mean, connect any bits of text to previous Q posts, and then offer interpretations on the connections. Solving mysteries and the community support made them feel smart. It offered a sense of purpose and control in a time where those things were scarce.

Now that reward is mostly gone. Q has gone silent since early December. When President Joe Biden was inaugurated and the Trump presidency ended with none of the prophesized mass arrests of the government, the foundations of the QAnon belief system came crumbling down. Some prominent QAnon supporters are distancing themselves. Marjorie Taylor Greene, the US representative from Georgia who was an active online supporter of QAnon and other conspiracy theories, has been removed from her Congressional committee appointments. Though she tweeted about “anti-Trump pedos” as recently as January 31, 2021, she disavowed these beliefs as she defended herself before Congress days later. The failed prophecy, external evidence contradicting the internal narrative, and the resulting disillusionment and cynicism are all core elements necessary for people to abandon cults and conspiracy theories. We need to take advantage of this moment.

Some QAnon followers remain steadfast, shifting the goalposts, looking for clues in old Q posts that connect to current events. For example, on February 15, 2018, Q posted the line “Watch the water.” In the past few weeks, as the reddit group WallStreetBets pushed up the stock price of GameStop, a Q follower found a dictionary definition of “water” that included a financial usage relating to inflating the value of an asset, which launched a discussion about whether Q’s original post may have predicted the GameStop fiasco (or the many other things it may have predicted). However, for some Q followers, grasping this desperately for meaning is too much. Many are realizing they were lied to. When followers turn away from Q, what will they turn toward? There are several obvious paths.