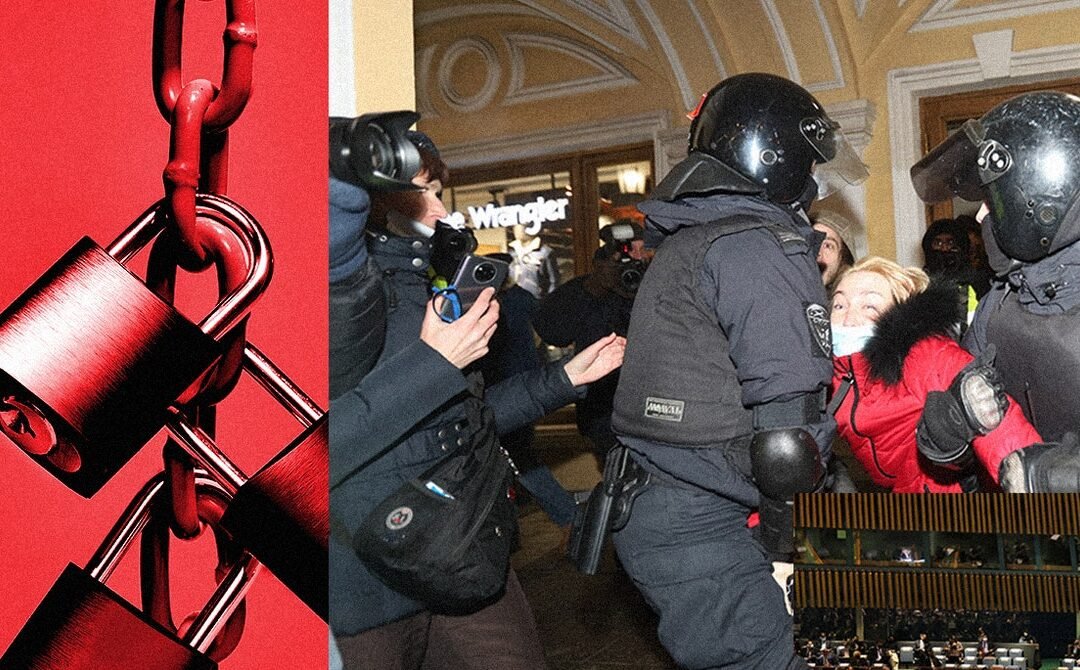 When Olga Kitaina took to the streets of Moscow on February 24 to protest the invasion of Ukraine, she knew the price she might pay. The 31-year-old psychologist had actively opposed the Putin regime since 2011, even volunteering for the opposition party in the 2013 elections. Not only had she heard the horrors that happen to dissidents, she’d also seen the disturbing videos: footage smuggled out of the notorious OTB-1 prison by Sergey Savelyev, a Belarusian man first jailed in 2013. The videos weren’t news to activists, but they were proof of systematic torture and rape.

Despite that risk, Kitaina took to the streets. Luckily she escaped arrest that night, and seven days later she escaped the country, joining at least tens of thousands of other dissidents. Kitaina and her husband, a successful Russian lawyer, packed up their lives in a single suitcase, frantically withdrew all the money they could from Moscow ATMs, and got on separate flights to Tbilisi, Georgia, fearful that flying together they might be more likely to be stopped by border guards, arrested, and worse. “Everything was changing, like every hour,” Kitaina says. She worried that someone would stop her at the border, whether she had taken everything she needed, and if her husband would be left behind. There was “gossip that the government will close the borders, at least for men.”

But because of Big Tech—not government—sanctions, not only did Kitaina leave her country behind, she also left her clients. Kitaina is the founder of Alter, the first tech platform to connect Russian psychotherapists and those seeking therapy. Today, her firm supports hundreds of mental health providers and more than 38,000 clients, and she’s completely locked out of her data.

Alter relied on the ubiquitous US-based email firm Mailchimp to collect subscriber data and connect with users. On March 14, Inuit, which runs Mailchimp, along with Turbo Tax, Credit Karma, and several other financial software products, suspended all customer accounts in Russia. Now, in the middle of a war, at a time when her clients face untold mental health crises, Kitaina and surely countless others are cut off from their patients. There was no legal reason that Mailchimp had to freeze its service to Alter, and certainly no reason it had to keep the $1,485 monthly fee. But what Kitaina finds completely indefensible is how the firm has (without warning) walled her off from her own clients.

When Russian tanks rolled across Ukraine’s border, much of the world came together in support of the Ukrainian people. Some of the solidarity was as symbolic as the yellow and blue avatars plastered across social media. Some of it was as deadly as the Javelin rockets that now incinerate Russian tanks. But perhaps no support for Ukraine has been as clumsy and misguided as the response from Big Tech.

Sprawling sanctions from Western governments have sought to isolate the Russian economy and punish the regime. While these measures are unprecedented, corporate sanctions have gone further still, suspending business in ways that go far beyond what the law requires or what governments intended. Among many others: Google has suspended all ad sales and Play Store billing, Visa and Mastercard have shut down international transactions for Russian account holders, and consumer brands ranging from Coke to McDonald’s to Starbucks have been closing up shop in Russia. But with many of the tech company restrictions, in particular, it’s Russian dissidents, not oligarchs, who are getting hurt.

Governance by press release is no way to make life-altering decisions in a time of war.

Other dissident Russian entrepreneurs have faced similar stories. Until recently, Ksenia Babat resided in Moscow, where she founded Babat Consulting, described as “the first Diversity & Inclusion consulting company in Russia.” But she was forced to leave behind much of her work when she left Russia on March 12. She was impacted by a broad range of Western sanctions and business boycotts, making it impossible for her to collect payments and communicate with clients. But like Kitaina, Babat’s work fighting for inclusion was devastated by Mailchimp. “Mailchimp didn’t just leave the market,” she says, “but kept our distribution lists without giving us the opportunity to make a copy of it.” She adds, “A lot of entrepreneurs lost their database of thousands of clients just in a day.”

And the tech giant’s grasp extends far beyond the ranks of entrepreneurs. According to the Russian journalist Kevin Rothrock, Airbnb will turn away any guests trying to verify their identity with Russian documents. The restrictions from Visa and Mastercard only apply to international transactions, leaving those in Russia comparatively untouched but cutting off dissidents and journalists who fled from their Russian assets. Many of those fleeing the Putin regime could end up living on the streets simply because they were brave enough to stand up to injustice and had to leave their homes.

I don’t doubt that tech giants want to do the right thing. I don’t doubt that they tried to stand with Ukraine in its hour of need. But what is increasingly clear is that these companies are simply incapable of wielding the power they now hold on the global stage. We often hear how large tech firms are more like countries than companies. While that may be true when it comes to the scope of their influence, it rarely represents the reality of how they wield that influence. Rather than making sober, thoughtful, decisions, they respond rashly in the hope of garnering good PR. But governance by press release is no way to make life-altering decisions in a time of war.