The Atlanta Shootings Made Me Stop Gaslighting Myself 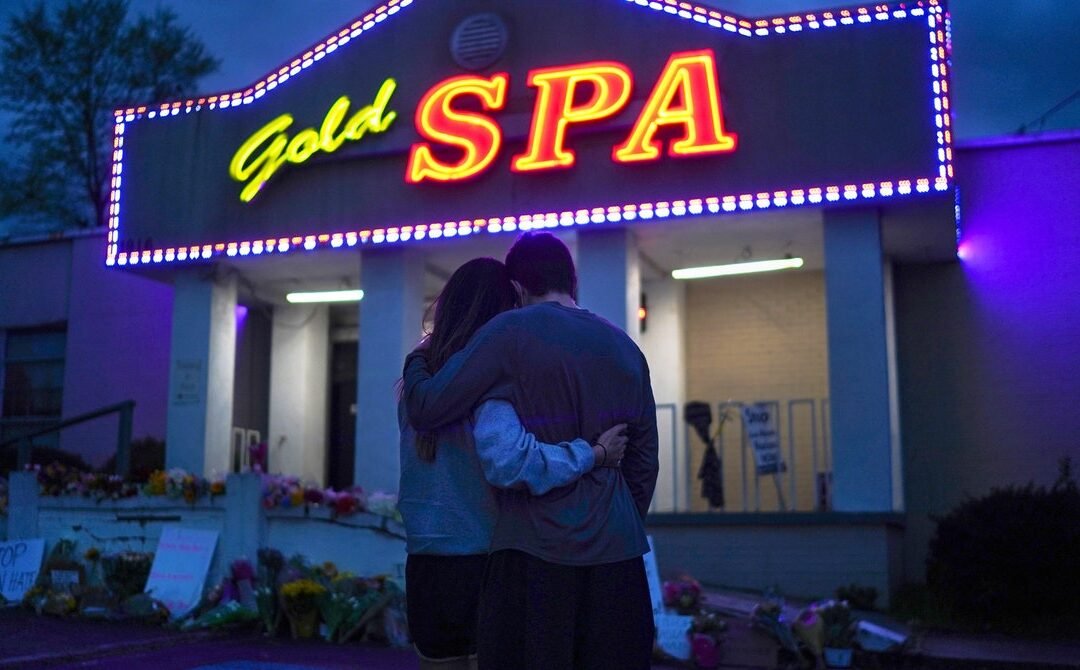 “So, seeing as ‘home’ is a relative term anyway, where would you say is home?”

“Ah, but you sound completely American!”

The question had been posed by a fellow dog-walker, a certain well-meaning but irritating type of Western Massachusetts resident. The white person’s performance of wokeness is predominantly for themselves, and it necessitates endorsement by a nonwhite person. Here the Asian person is very useful: We come with built-in model minority complexes, are aligned with whiteness in key ways, and possess a cultural propensity to publicly perform politeness. So, it’s me this man has to address. My eyes are overscored with an epicanthal fold, also known as the “Mongoloid fold,” and my skin has a yellow undertone. After an afternoon in the sun, I caramelize into a biscuity shade of brown, but never burn. These, I knew, were what prompted his peevish question, cloaked though it was in discursive eccentricity.

After 14 years in the US, I have learned to be vigilantly hyperaware of my skin. Racism most of the time rubs more like a rash than a gash. Sometimes it’s hard not to feel like I’m whining. I am, after all, ensconced in my own kind of privileged position. I can be read at the outset as a kind of bougie cosmopolitan academic—from Singapore, just exotic enough. I am unburdened by some of the things that weigh on Asian Americans (model minority, growing up as minority), though I am burdened by others: Hey FOB! You have an accent! Touché, so do you. Mostly, I remind myself that no one, at least, is throwing eggs at me from a car and yelling “Fucking Chink!” then going around the block and doing it again—which happened in my first semester at Berkeley.

The long moment of the pandemic and its requirements of additional cladding have made the significance of visual, external inscriptions of race and ethnicity concrete. In Covid’s early days, masks “marked” one a certain way: Asian, liberal, etc. In their ubiquity later on, masks literally masked difference. I live in a conservative part of Western Massachusetts; all through 2020 houses in the area brandished frightening and violent Trump paraphernalia. Before mask-wearing became widely practiced, I feared marking myself as “foreign” by wearing one. Then I feared being “exposed” as Asian when not wearing one. So I covered up completely. Under my hat, behind my sunglasses and mask, who could know who or what I was? A month into the pandemic, as Trump was spewing vitriol about the “China virus,” my husband and I decided to stop walking in the woods with our dog for fear of running into a gun-toting Trump supporter. When we shared this decision with others, we always felt embarrassed, like we were overreacting.

As an Asian person in America, one learns to be grateful for the small things. I’m told my food is stinky, but if I’m compliant, no one will bludgeon me and drag me off a flight. One tells oneself, “At least it was an egg and not a bullet.” In her New York Times op-ed on the recent wave of anti-Asian hate crimes, Anne Cheng drove this point home: “Are Asian Americans injured, or injured enough, to deserve our national attention?”

And then, on March 16, a white man shot up three massage parlors around Atlanta, including one called Young’s Asian Massage, and killed eight people, six of whom were Asian women.

The truth is, “Chink” is one of the less insulting things I’ve had yelled at me, less stinging than the gendered and solicitous ni haos, or the unshakeable, awful Kubrickian “me love you long time.” Let’s be clear, in a year that saw a stratospheric spike in anti-Asian hate crimes, the majority were against women. Until this week, I’d been struggling to give gravity to what I knew deeply were important issues concerning Asian women in particular, but I kept second-guessing myself, worried I was being irrelevant, missing the point, or diverting attention away from events at hand. In my frustration, my writing devolved into ranting lists that ran the gamut of instances of microaggressions to harassment, to assault, to my own paranoia. I worried I sounded petty or dramatic—indulgent, for taking up space. When a white man murdered six Asian women and two other people because he had a “bad day,” I knew I had gaslighted myself—a revolting feeling of both vindication that I was not crazy and horror that my worst suspicions had been confirmed.