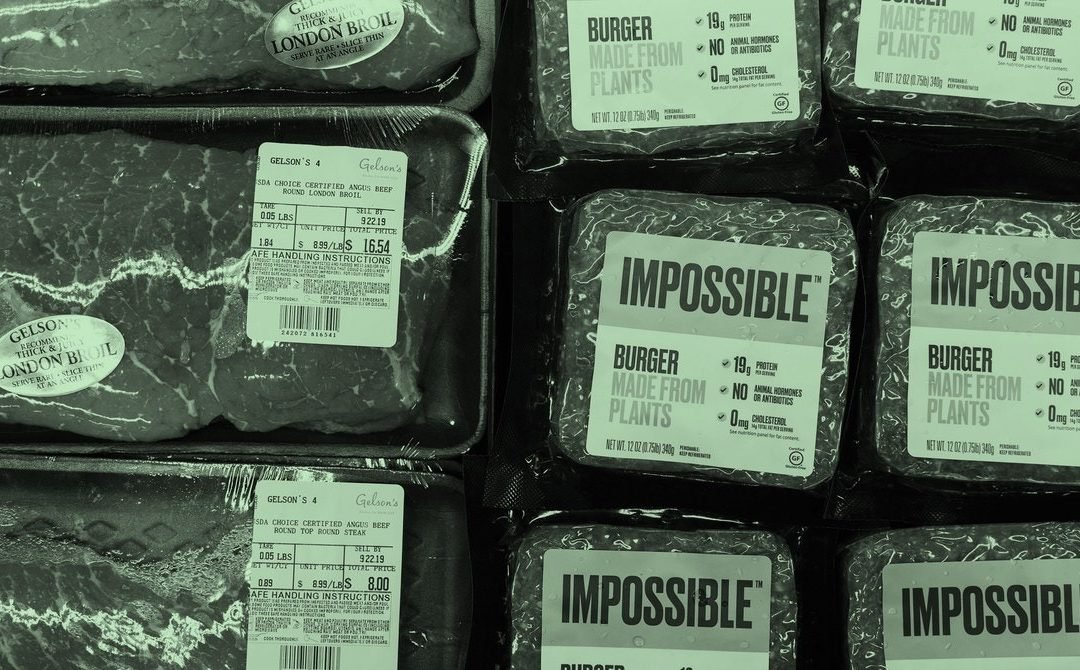 We live in the Year of the Faux Burger. The meatless Impossible Whopper debuted at Burger Kings across the United States in August, while McDonald’s is rolling out what it calls the P.L.T. (plant, lettuce, tomato) in Canada to see if customers bite. Beyond Meat, which makes the patty for the P.L.T., went public in May and became the hottest stock of 2019, pushing the company’s valuation well into the billions. One hedge fund manager compared the enthusiasm over fake meat to early investor frenzy over Bitcoin.

Now into this burgeoning culinary niche comes a new offering: The Blend.

It’s a dull name for a curious product. The Blend, from Tyson Foods, is made using pea protein, just like Beyond Meat’s burger. Both come in brown-and-green packaging. Both are soy-free. There is one notable difference, however, between the two products. The Blend, in contrast to Beyond Burger, contains beef. The kind from actual cows.

The Blend is a new entry in an unlikely market category that has emerged in recent months: foods that aren’t quite meat, but aren’t really not meat, either. Hormel debuted its own gastronomic mishmash earlier this year as part of the Applegate Organics line—a fake-meat/real-meat, beef-and-mushroom patty that is, confusingly enough, called The Great Organic Blend Burger. The company bragged that it had created a “mouthwatering burger that epitomizes clean labels while also catering to the growing population of flexitarians.” Applegate’s president, John Ghingo, proclaimed it a “win, win, win for conscious carnivores.”

It’s not just beef that’s getting a remix. You can wash down your triple-win semi-burger with a tall glass of half-almond, half-dairy milk from Live Real Farms, which insists that their new beverage, out last summer, “might be the most purely perfect blend of milk ever”—a claim that’s likely true because it also appears to be the first such milk blend. Or complete your amalgam-meal with a side order of Perdue’s “Chicken Plus” Chicken Breast & Vegetable Dino Nuggets, a concoction of rib meat, cauliflower, and chickpeas formed into the approximate shapes of long-extinct creatures.

If you’re a conscious or conflicted carnivore, why would eating planimals—a portmanteau that so far none of these companies has embraced—be an appealing dietary solution? Tyson’s tagline for The Blend, “Don’t Change Who You Are To Improve How You Eat,” suggests that there are consumers who want a burger with fewer calories and less saturated fat but worry that eating a straight-up veggie burger would mean surrendering some essential part of their identity. It’s a slippery slope from there to playing Hacky Sack shirtless at a farmer’s market.

As a non-vegetarian who often eats veggie burgers, I’m pretty much the target demo for this brave new protein category. My fellow flexitarians and I, who make up either one-third or one-fifth of the population depending on how you count, are usually motivated by overlapping concerns about health, animal welfare, and the environment. We care about these things, but not enough to abstain entirely from consuming flesh. In theory, the in-between burger is just what we’ve been looking for.

Or at least you see how a meat-company executive could arrive at that conclusion. If all these flexitarians are up for eating veggie burgers and beef burgers, they should be extra chuffed at the prospect of eating both at the same time. A sandwich that splits the difference—finally the code has been cracked! One imagines Tyson and Hormel executives nodding at this forward-thinking pitch while nibbling contentedly on Vienna sausages. (I’m guessing this is how meat-company executives behave behind closed doors.)