The Secret, Essential Geography of the Office 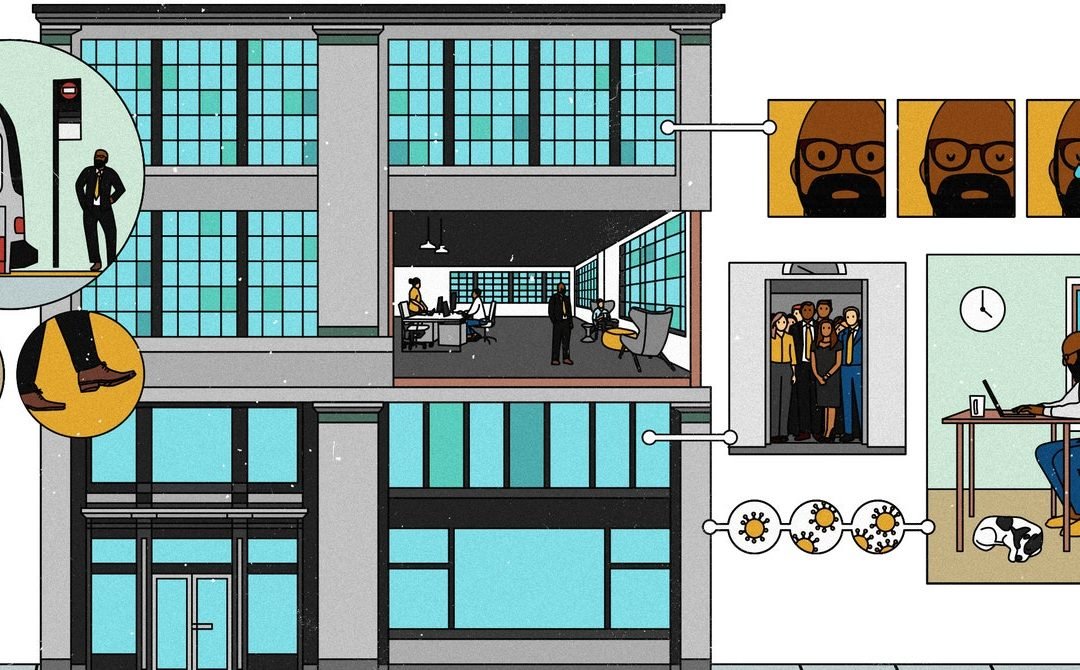 I once worked for a few weeks at a big, busy company, and one day I asked, jokingly, “Where do I go to cry?” An hour later, I was taken aside and told in seriousness about a specific stairwell. Another person there led me on a five-minute walk through the skyscraper to a tiny, hidden conference room, and then made me promise to keep the location a secret, a vow I have kept. (They also cried.)

I think of those as “weeping paths,” part of the secret map of every office. You cannot sob at your desk, so you must go on a journey, smiling at the floor, until you find a place where emotion can flow. Offices have their own mental maps. “Oh,” they say, “she’s moving to the 17th floor.” And everyone says: the 17th floor! And you know, being a social primate, exactly where you are in the organization relative to that floor. Offices all have their formal and informal maps, whether inside a bank, statehouse, cathedral, museum, school, or open-plan tech firm. I say “West Wing” and you know what I’m talking about.

I keep reading that the office era is over—that our pandemic has proven that “office culture” is an oxymoron. When the virus hit we left our desks and threw away our commutes, and now no one can tap our shoulders (or, much worse, massage them). And aren’t we better for it? Don’t humans work better as nodes in a network than as cattle in a pen? We are, finally, free to get to it.

An office is basically a big clock with humans for hands.

But I don’t buy this. There’s a book I love, Space and Place, by the human geographer Yi-Fu Tuan. Human geography is a beautiful ’70s-style academic discipline, and Tuan is its gentlest practitioner. Space and Place is only about 200 pages of thoughtful prose, but I’ve never finished it; I read a paragraph at a time, and that fills up my brain. I’ve been reading it for a decade. He writes: “The manager’s office may be only two doors from the vice president’s office, but it will take the manager years of hard work to get there. The vice president’s office is a temporal goal. Goal is also a place in space, the promised land on the other side of the ocean or mountain.” And then there’s a little subway map where one train line is time, ending in the vice presidency, and the other is distance, ending in the “promised land.” You need to see it. (So beautifully broad. Everyone today has to be so specific.)

I love visiting offices, listening to their hum. Literally: I sometimes went to a giant financial firm where they traded different kinds of securities on different floors, and if it was a big day in bonds the fourth floor would be loud, loud; the fifth floor, though, focused on shorter-term investments, would be almost silent. You could hear the economy.

I enjoy the rituals of visiting. First, there is security: How long will I wait? Who will greet me in the lobby, should I ever gain access—a human whose job is to handle ingress and egress, or is each person expected to greet their own visitors? Will I get a VISITOR sticker, and will the sticker change color in a day, for security purposes? Is the coffee brought to me or may I get it myself? Sometimes you learn that people have had sex in a given office, which is hard to forget. There are cardinal directions—elevatorward, kitchenward, bathroomward. Favored stalls. Better sinks. Teensy little geographies shared between humans.

I have a friend who worked at the White House, back in calmer times, and he told me about some of his workplace battles. I said to him one of the dumbest things I’ve ever said in my life: “The White House seems like a really political place to work.” I still cringe to think of it. Yet it’s a place where power is absolutely explicit and geography means everything. And “place,” as Tuan points out, is really a proxy for time. The president might summon anyone any moment of the day, from anywhere in the nation. If you work in one of the rare offices in the West Wing, instead of across the alley at the enormous Executive Office Building, you can be in the Oval Office in a minute. It’s purely about time, measured in the count of footsteps between you and power. Everyone knows that. The West Wing offices themselves absolutely suck. The whole place smells weird.