The Twisted Flight Paths of ‘Global Girl’ and the Lolita Express 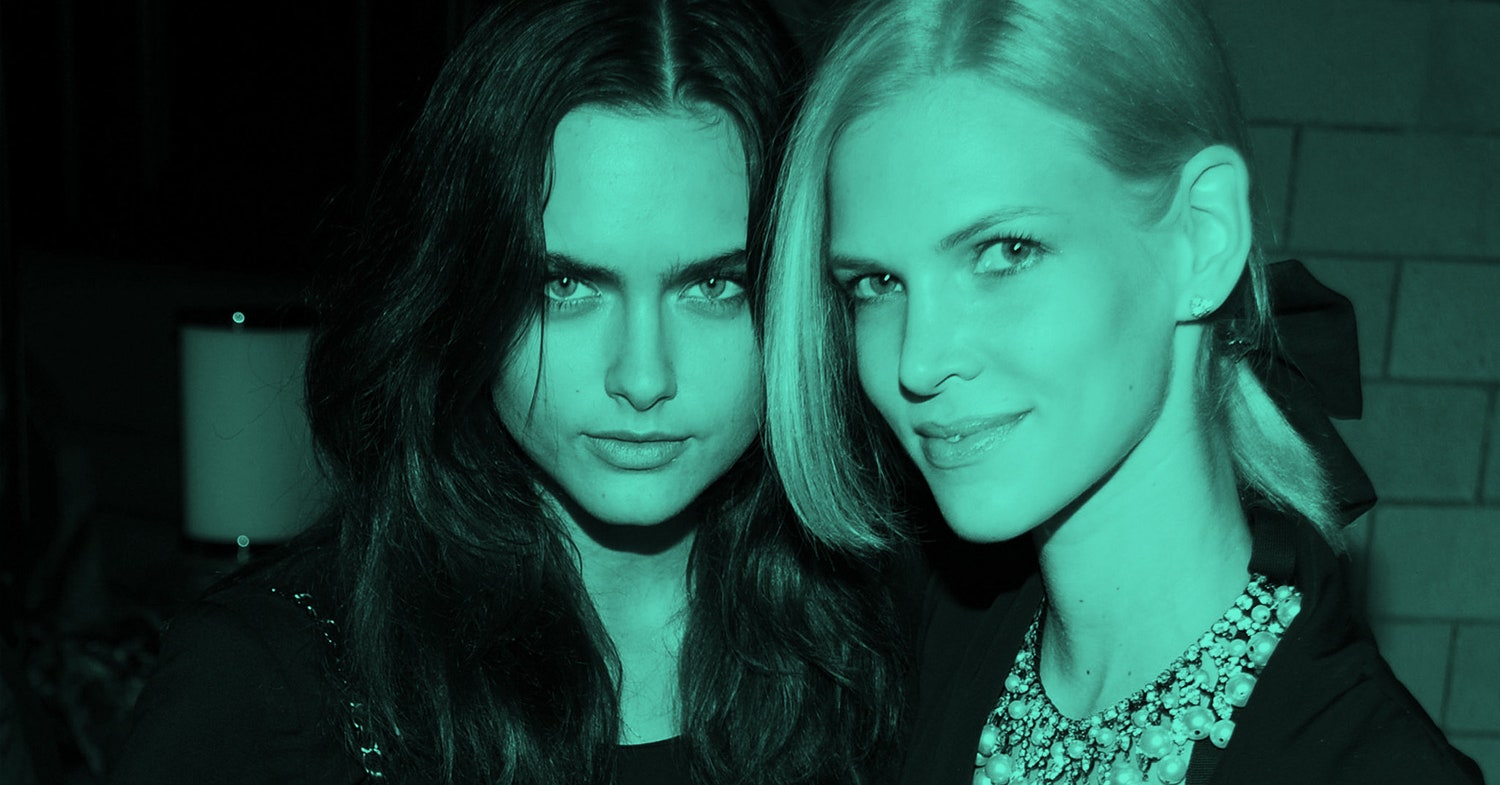 The Gulfstream Girl can’t use that nickname anymore. In 2013, the model turned pilot—then 27, blond, often beaming in photos—was hit with a trademark infringement suit by Gulfstream Aerospace, which told her its brand name was off-limits.

That must have been a disappointment. As a commercial pilot, the former Gulfstream Girl, whose real name is Nadia Marcinko and before that Nadia Marcinkova, holds three rating certificates: for single-engine aircraft, multi-engine aircraft, and various Gulfstream business jets, which have their own rating certificates. Furthermore, she is the CEO of Aviloop, a supremely odd aviation branding business, whose website features flawless shots of her with Gulfstreams.

Marcinko was a good sport about losing her old handle. In the Miami Herald last year, Julie Brown reported that Marcinko was “brought” to the US from (the former) Yugoslavia to live with an abusive man more than 30 years her senior when she was 15. It’s not hard to imagine she’s adept at survival. Moreover, as an aerobatic pilot, she’s stylish and dashing; in a video from March 2018 (taken down just last week), she flips a Pitts S2B and then eats a doughnut, hanging from a ribbon, while upside down in the cockpit. In materials for Aviloop, she now calls herself Global Girl.

Marcinko’s shifting sobriquets bring to mind the opening to Vladimir Nabokov’s novel of child rape. “She was Lo, plain Lo, in the morning … She was Lola in slacks. She was Dolly at school. She was Dolores on the dotted line. But in my arms she was always Lolita.”

Which makes sense, as the airplane that would later help shape Marcinko’s life in America—a large-cabin Boeing 727 now associated with both high glamour and incomprehensible suffering—was known as the Lolita Express. It belonged to Jeffrey Epstein.

Nadia Marcinkova, by that name, first appeared in court documents, in Florida, about a decade ago. She was 22 then and had been in the US since 2000. She is one of the most prominent immigrants in the circle of Epstein, the accused child rapist and registered sex offender who was arrested on sex trafficking charges at Teterboro Airport on July 6. (He has pleaded not guilty). Unlike the hundreds of young girls who, according to testimony in court documents, were lured by Epstein and his surrogates to his mansions from Florida trailer parks, Manhattan high schools, and Donald Trump’s Mar-a-Lago resort, Marcinko belonged to a smaller group who came to the Epstein syndicate—presumably by plane—from abroad. An attorney who represented Epstein’s alleged victims described Nadia Marcinkova as “Epstein’s live-in sex slave” in a Florida court filing. Several girls told the Palm Beach police that, later in the aughts, Marcinko pressured them to have sex with both her and Epstein.

Through the years, Epstein has maintained a fleet of aircraft that has included: a Gulfstream IV, a Gulfstream GV-SP, a helicopter, and the Lolita Express, which seated nearly 200 people. In the aughts, when Epstein logged some 600 hours of flight time per year, New York magazine reported that he flew so much because he was scouting “investment opportunities.” Before he landed in jail this month, Epstein’s private jets were still criss-crossing the planet about every third day. An employee at an airstrip in Saint Thomas, close to Epstein’s 70-acre property in the Virgin Islands, which is nicknamed Pedophile Island, told Holly Aguirre of Vanity Fair that Epstein could often be seen getting out of his helicopter and boarding his jet with “children—female children.” The employees expressed disbelief and disgust that Epstein, a convicted sex offender, could move around so easily.

Though Epstein exploits an obscure federal policy that lets private owners hide their movements from the public record, the manifests from hundreds of flights are available—and they clearly show the names of the celebrities, from Alan Dershowitz to Bill Clinton, linked to Epstein.

Marcinko’s flights are somewhat harder to pin down, as girls in Epstein’s circle were often recorded only by first names or initials. The name Nadia appears in 2003, and “Nadia Marcinkova” appears on a manifest for a flight out of Palm Beach in 2004. Then “NM” starts to show up on nearly every manifest for both one of the Gulfstreams and the Lolita Express. While “NM” was generally noted zipping among airports in Palm Beach, Florida, Monterey, California, and New York, she also visited Columbus, Ohio, Newfoundland, and Terceira Island in the Azores. A pilot for Epstein testified that Marcinko had flown with Epstein hundreds of times.

The available manifests record no flight of “NM” to Bratislava, or anywhere in Slovakia, which Marcinko told a plane enthusiast magazine was her home country. (And because the manifests from 2000 are not available, it’s still not clear whether she left home in an Epstein plane.) On March 22, 2019, though, Epstein’s Gulfstream GV-SP flew from Paris to Bratislava—and returned five hours later.

Marcinko is one of four named alleged accomplices of Epstein who were given immunity from prosecution in 2008. That was the year that Epstein was convicted of one count of solicitation and another of procuring a girl under 18 for prostitution. For this, of course, he was given a nauseatingly light sentence with extensive “work release,” during which, as the lawyer for several of Epstein’s victims alleged this week, he continued to have “improper sexual contact” with young women. The lax sentence and the immunities were part of the deal Epstein got from Alex Acosta, who was then the US attorney for the Southern District of Florida and was until July 19 Donald Trump’s secretary of Labor. Acosta resigned the post amid the furor over his leniency with Epstein.

After Epstein was arrested this month, federal prosecutors further alleged that Epstein paid two people whom investigators identified as coconspirators hundreds of thousands of dollars in 2008, seemingly to keep them quiet. The cash recipients weren’t named, but it’s not unreasonable to infer that one of them could be Marcinko.

Among the coconspirators who were given immunity back then, and who might have been paid off by Epstein, is Sarah Kellen, a regular on Epstein’s flights who was accused by lawyers in court filings of “bringing girls to Epstein’s mansion to be abused.” Lesley Groff is another coconspirator, an alleged sex scheduler in Epstein’s ring who is said to have coordinated “travel” with young girls.

With a sex trafficking case, neutral language can become sinister. For instance, there sure is a lot of ominous “bringing” in this story, with girls as the verb’s direct objects. Is bringing, when it comes to unaccompanied minors, also kidnapping, trafficking, or even enslaving? Was the travel Groff reportedly coordinated international—to the US, maybe on commercial flights? Was it consensual?

Federal prosecutors untangling the Epstein web are going to have a lot of flight paths to study—and perhaps one day we will see a map of a modern-day slave trade, connecting points east and south like Slovakia and Ecuador with Palm Beach, New York City, and perhaps some of Epstein’s other hangouts and redoubts, including Columbus, Ohio, and New Mexico.

Finally, among the alleged coconspirators, there’s another immigrant: Adriana Ross (aka Adriana or Adriana Mucinska), a former model from Poland whom Epstein supposedly hired in 2002 to set up what the court documents refer to as “sex sessions” in Florida. It’s not clear whether Epstein and his recruiters first encountered Ross in the US or Poland, but, according to flight logs, Ross is one of the people in Epstein’s circle who flew most frequently with Bill Clinton. She also appeared by Epstein’s side in Manhattan, at a magazine launch party in 2005. Ross refused to answer questions about Epstein in 2010.

As far as Marcinko goes, that chapter of her life—her teens and early twenties when she was rolling with Ross, Kellen, and Groff—seems long past. According to The Washington Post, she’s not taking calls from reporters. For this story, I tried to reach her through LinkedIn, YouTube, and other social media, as well as through a few of her friends; I heard nothing back. Her LinkedIn résumé no longer mentions her work for Epstein’s outfit. In one deposition she declined to answer questions. Nadia now uses Marcinko, a revision of the name in the 2008 indictment.

The company of Mark Epstein, Jeffrey’s brother, owns a majority stake in the building on 66th Street, including the unit Marcinko apparently lived or lives in; Mark says he has never heard of Aviloop, which was registered at that building for at least seven years. (As recently as 2015, Sarah Kellen took deliveries at the same building.) So, in spite of the immunity and the name changes, maybe Marcinko is not as far out of the gravitational pull of Epstein’s world as she might want to be. Especially with Epstein back in the news.

Marcinko’s story is her own, though. And with Epstein facing new charges, her testimony could be invaluable. After all, among the numberless women and girls who have come forward saying they were raped and enslaved by Epstein and his syndicate, she and the other alleged coconspirators could belong to a subset who may have started out as victims and ended up as possible abusers. Victims have testified that Marcinko was central to Epstein’s recruitment strategies and often joined in the abuse.

Her story also suggests a possible connection between the indentured girls who say they were brutalized by the Epstein syndicate and a part of the global transportation infrastructure of human trafficking. If Epstein’s arrest really does lead to a sustained effort to break the back of international sex-slave trade, governments should monitor more closely the use of Gulfstreams and Boeings to oligarchs and their cutouts. They are also going to have to crack down on planes full of human “cargo,” complicit private airports, and the extensive brutality, inhumanity, and complicity of some in this corporate jet set.

Did Nadia at 15 run away with Epstein or a recruiter? Was she, as alleged, actually purchased as a slave—and from whom, for how much, in what currency, with what trace of the transaction? What did the future aviatrix feel at 15, on her way to the US? Was she taking her first of many rides in a private jet? Was there a hastily arranged passport? Did other girls fly with her?

Global Girl’s site for Aviloop says that, after modeling, Marcino turned to aviation because she was “ready for longer runways.” Maybe so. And maybe, after being “brought” from home into sex slavery and then “brought” to parties and seemingly “brought” to her alleged role as rape facilitator, Marcinko wanted to pilot her own life for a change. But in videos for Aviloop, she seems only to fly around white-haired old men, and it’s hard to imagine her truly dazzling smiles don’t conceal something else. It’s all too sad, and anyone who is said to have entered bondage at 15, and was forced to act as a sex slave, deserves much, much better.